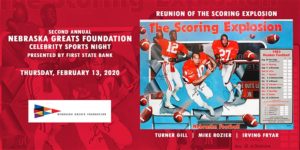 A great night for a great cause – The 2nd Annual Nebraska Greats Celebrity Sports Night presented by First State Bank is the “Reunion of the Scoring Explosion” with a storytelling session featuring Turner Gill, Mike Rozier and Irving Fryar moderated by Jim Rose.

Our inaugural Celebrity Sports Night drew over 700 attendees in support of former Nebraska college athletes who have emergency medical and financial needs and this year’s event will be just as unforgettable:

The Nebraska Greats Foundation provides financial assistance to former Nebraska male and female collegiate athletes who, as a result of a medical challenge, have exhausted both their insurance and personal resources. We assist all 15 colleges and universities in Nebraska.

The Nebraska Greats Foundation is an official 501(c) (3) non-profit corporation chartered in Nebraska. Our Federal tax ID number is 45-5122321

The Legends Radio Show is dedicated to the Husker sports legends of past and present. Hosted by the legend himself Jerry Murtaugh & Guy Ingles the show airs every Saturday on AM 590, an ESPN affiliate, from 9 a.m. to 10 a.m.